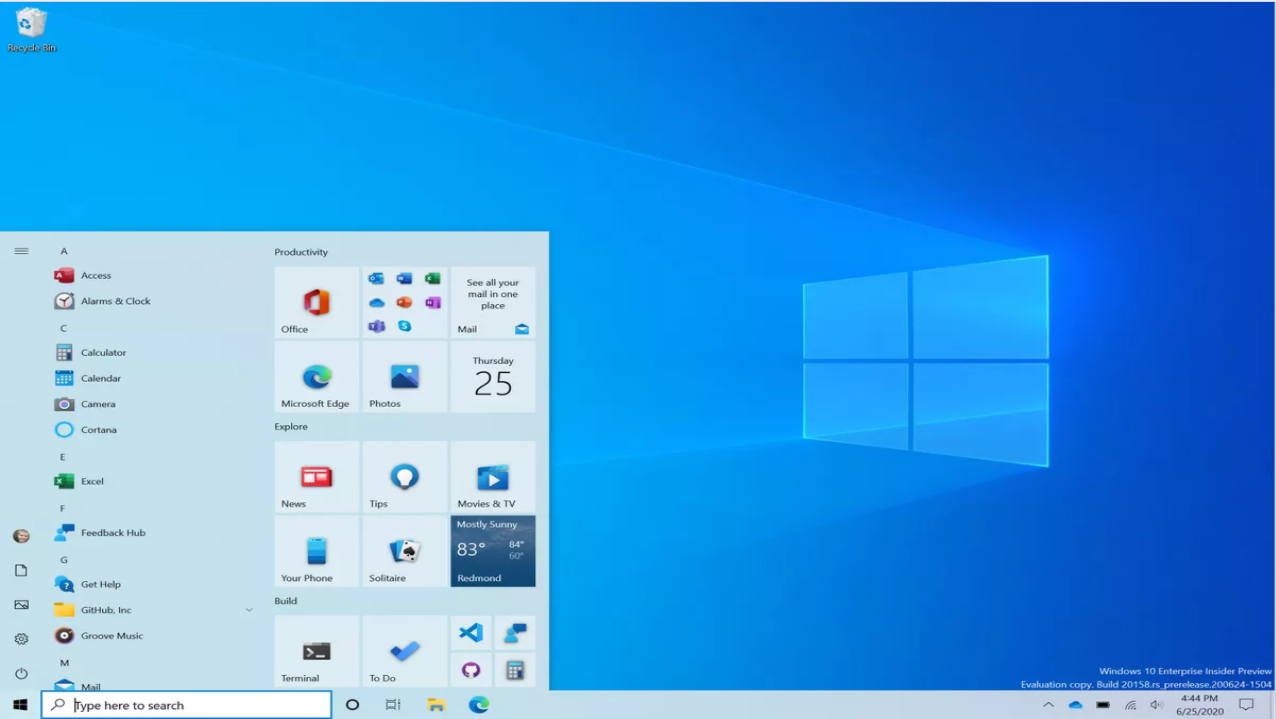 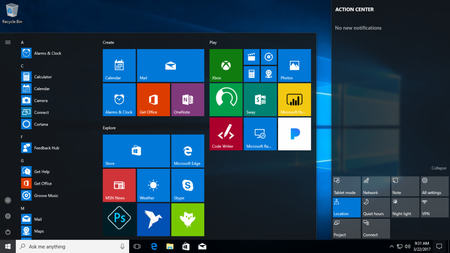 Before Windows 8.1 was released, there were many reports that claimed the existence of «Windows Threshold», a supposed OS that would be the successor to Windows 8. Nine months later on July 21, 2013, build 9795 was leaked. Screenshots showed the new Start Menu, almost the same as the one shown at Build 2013. Microsoft China also confirmed Windows 10 on September 2, 2013 on Weibo. Additionally, Build 9834 was leaked by sites WinFuture and ComputerBase. It will also include multiple desktops, to improve multitasking. Before Microsoft officially announced it, news reports referred to the operating system by several names, most notably Windows 9. Along with the announcement of Windows 10, Microsoft introduced the Windows Insider Program. The program is designed to allow people see the future of Windows and give feedback, introducing a public element to the development process. To aid in the receiving if feedback, Microsoft included a Windows Feedback app into the released builds of Windows 10. Build 9860 introduced a speed to receiving updates, along with an explanation as to how the Windows Insiders (as they’ve been called by Microsoft) get the builds. Since its unveiling in September 2014, Microsoft has pushed 15 builds officially through the Windows Insider Program: Build 9841, Build 9860, Build 9879, Build 9926, Build 10041, Build 10049, Build 10061, Build 10074, Build 10122, Build 10130, Build 10158, Build 10159, Build 10162, Build 10166 and Build 10240 (RTM). Additional builds, like Build 10051, were leaked and acknowledged by Microsoft, but were not officially released by Microsoft. 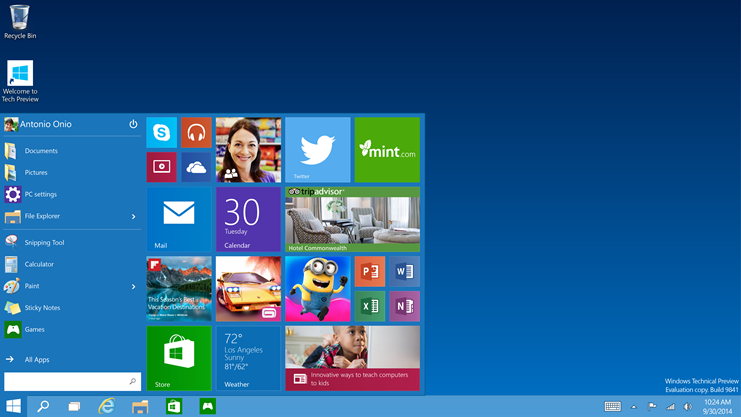 The Start Menu as it appears in early builds of Windows 10.

Microsoft has replaced the Start Menu screen with an updated «Start Menu» box similar to the one from Windows 7. The left side of the Start Menu resembles the left side of the XP style Start Menu, while the right side is a reduced version of the Windows 8 Start Menu. Windows 10 will include Virtual Desktops and a Notification Center, and has the ability to run apps in desktop windows. Leaked builds show an integration of Cortana, the personal assistant introduced in Windows Phone 8.1. Files for Cortana can also be found within current Windows 10 Builds. Animations have been improved for opening, maximizing, minimizing, and restoring down windows, as well as switching between virtual desktops. Current builds released to the public also suggest a new means of updating the operating system, as each build has been updated through a function within Windows Update rather than through clean installs. A feature showed off at the announcement presentation in September, named Continuum, shows the ability for the Start Menu to switch between the traditional Start Menu and a new version of the Start Screen from Windows 8. Build 9901, which was leaked in December 2014, showed off a more complete user interface, introducing an opaque taskbar and cleaner app windows, as well as a cleaner search bar in the taskbar where Cortana can be accessed. The build also features entirely new apps for the Calculator, Alarms, Photos, and Windows Store, which appear more desktop friendly. Control Panel also has begun to be deprecated, and PC Settings has been renamed «Settings.» In addition, Settings has been removed from the Charms. On January 21, 2015, Microsoft held an event on the future of Windows 10. A new build was shown off, which shows off a more unified and complete user interface. Cortana is now integrated and functioning properly within Windows. A cleaner Start Menu, coded using XAML, was also presented, along with the ability to switch between the standard and full-screen modes of the Start Menu. Windows 10 was also unveiled for the first time on mobile phones. With this announcement came the presentation of a new Action Center with interactive notifications for both desktop and phones. New universal apps for both systems were unveiled, including new apps for Photos, Outlook Mail, People and Calendar. The rumored «Project: Spartan», a new browser that could potentially replace Internet Explorer, was unveiled and shown off, with integrated Cortana, a new annotation mode that works with Microsoft OneNote and a new Reading List. In addition, Windows 10 was announced to power gaming within the operating system through XBOX, along with a new Game DVR to record games, and a new streaming feature to stream and play XBOX games through the XBOX One console onto any device running Windows 10. Two additional hardware devices were unveiled that would run Windows 10: the Surface Hub and the Microsoft HoloLens. The build shown off at throughout most of the event was Build 9924, though the next build is reported to be Build 9926Neowin — Hands on with build 9924 of Windows 10, and not all the features shown off at the event would be immediately available. The build would be available through the Windows Insider Program in the week following the event, while the first build for Windows 10 on mobile phones would be made available in early February («After the Seahawks win the Super Bowl»). Microsoft also announced that Windows 10 would be a free upgrade for all computers and devices running Windows 8.1, Windows Phone 8.1, and Windows 7 during the first year after the launch of Windows 10.

Windows 10 is serviced in a significantly different manner from previous releases of Windows. Is delivery is often described by Microsoft as a «service», due to its ongoing updates, with Terry Myerson explaining that Microsoft’s aim is that «the question of ‘what version of Windows are you running’ will cease to make sense.»

Unlike previous versions of Windows, Windows Update does not allow the selective installation of updates; instead, all updates (including patches, feature updates, and driver software) are downloaded automatically. Users can only choose whether the system will reboot automatically to install updates while the system is inactive , or be notified to schedule a reboot. Windows Update also uses a peer to peer system for distributing updates; by default, users’ bandwidth is used to distribute previously downloaded updates to other users, in combination with Microsoft servers. Users can instead choose to only use peer-to-peer updates within their local area network.

Every version of Windows 10 has a version number. The version number comes out when an update is released and it ends when it’s no longer maintained.

Note: You must be signed in as an administrator to be able to switch to the old battery indicator.

Microsoft has published a list of Windows features that are no longer actively developed. Microsoft states that these features may potentially be removed in future updates to Windows 10.

The basic hardware requirements to install the Windows 10 Insider Preview are the same as Windows 8.1, however some older 64-bit CPUs may not be supported as well as some 32 GB and all 16 GB devices with a compressed system image.